The capital town of Bhutan and the center of government, religion and commerce, Thimphu is a lively place, an interesting combination of tradition and modernity. Home to civil servants, expatriates and the monk body, Thimphu maintains a strong national character in its architectural style. 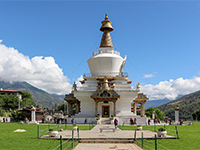 The building of this chorten was originally the idea of Bhutan’s third king, H.M. Jigme Dorji Wangchuck (“the father of modern Bhutan”), who had wished to erect a monument to world peace and prosperity, but was unable to give shape to his idea in his lifetime due to pressures of state. After His Majesty’s untimely death in 1972, the Royal Family and Cabinet resolved to fulfill his wishes and erect a memorial that would perpetuate his memory and also serve as a monument to peace. The National Memorial Chorten was consecrated on July 28, 1974. The finely executed wall paintings and delicately fashioned statues within the monument provide a deep insight into Buddhist philosophy. 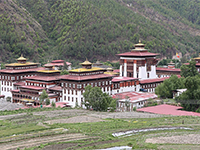 The “fortress of the glorious religion” was initially erected in 1641 and rebuilt by King Jigme Dorji Wangchuck in the 1960s. Tashichhodzong houses some ministries, His Majesty’s secretariat, and the central monk body. It is open to visitors during the Thimphu Tsechu (held in autumn) and while the monk body is resident in its winter quarters at Punakha Dzong. 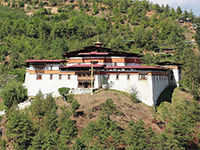 This dzong, built in 1627 by Shabdrung Ngawang Namgyal, stands on a low ridge 8 km. down the valley from Thimphu. The Institute for Language and Cultural Studies is located here. The most noteworthy artistic feature of this dzong is the series of over 300 finely worked slate carvings behind the prayer wheels in the courtyard. 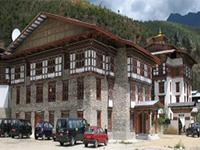 The National Library was established in the late 1960s primarily to conserve the literary treasures which form a significant part of Bhutan’s cultural heritage. It now houses an extensive collection of Buddhist literature mostly in block-printed format, with some works several hundred years old. This collection, known as the Choekey Collection, mainly comprises Buddhist literature written in Choekey, the religious script of Northern Buddhism, but also includes works written in Tibetan and in Dzongkha, Bhutan’s national language. There is also a small Foreign Books Collection, stock of which mainly comprises works written in English, with subject interest on Buddhist studies, Bhutan, the Himalayan region and neighboring countries. 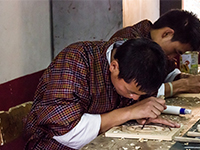 Commonly known as the Painting School, the Institute offers a six-year course on the 13 traditional arts and crafts of Bhutan. On a visit one can see students learning the various skills taught at the school. 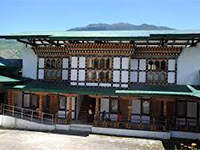 In Bhutan, equal emphasis is given to both allopathic and traditional medicines. The rich herbal medicines made up from medicinal plants abundant in the kingdom are prepared and dispensed here. The Institute is also a training school for traditional medicine practitioners.The complex is closed to visitors due to considerations of hygiene, but one can still walk around and view it from the outside. 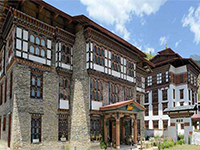 These museums, both of which opened in 2001, provide fascinating insights into Bhutanese material culture and way of life. 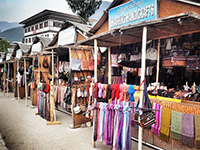 A wide assortment of colorful, hand woven textiles and other craft products is available for purchase at the government-run Handicrafts Emporium and many smaller crafts shops around the town. 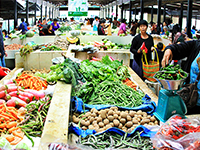 Most of the Thimphu’s population and many valley dwellers converge on the bustling weekend market, held down by the river. A wide range of foodstuffs and local arts and crafts are sold at the market, which runs from Friday afternoon to Sunday. A visit to the market provides great photo opportunities, as well as the chance to mingle with local people and perhaps buy souvenirs. 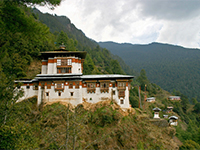 This monastery was founded by Lama Gyalwa Lhanangpa in the 12th century. The present building was erected in the 15th century by the “Divine Madman”, Lama Drukpa Kuenley. In 1616 Shabdrung Ngawang Namgyal visited Tango and meditated in a cave near the monastery. The picturesque three-storied tower and several surrounding buildings were built in the 18th century by the eighth temporal ruler of Bhutan, Druk Rabgye. The hike up the trail to Tango Gompa takes about an hour. 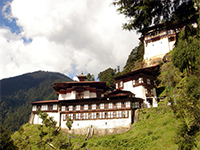 This monastery was built by Shabdrung Ngawang Namgyal in 1620. A silver chorten inside the monastery holds the ashes of the Shabdrung’s father. This trek trail starts by crossing a lovely bridge that spans the Thimphu river, then climbs steeply to the monastery. The journey takes about an hour. 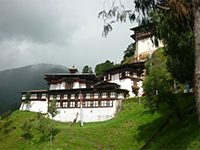 The complex is situated high on the hills overlooking Thimphu valley. It was founded by Phajo Drugom Shigpo, who introduced the Drukpa Kagyupa school of Buddhism in Bhutan in the 13th century. Phajoding was in former times one of the richest monasteries in the country. It is a wonderful hike of about 4 hours from Thimphu to the monastery.