Pemagatshel is the smallest district in Bhutan. It covers part of an ancient region called Dungsam which was on the trade route between Trashigang and the Indian state of Assam. It is a rural district with scattered gypsum mines. Tshebar village in Pemagatshel is also known for its skilled craftsmen especially of musical instruments. 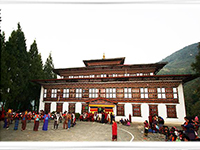