This beautiful valley encapsulates a rich culture, scenic beauty and hundreds of myths and legends. It is home to many of Bhutan’s oldest temples and monasteries, the country’s only airport, and the National Museum. Mt. Jomolhari (7,300m) reigns in white glory at the northern end of the valley, its glacial waters plunging through deep gorges to form the Pa Chu (Paro river). The Paro valley is one of the kingdom’s most fertile, producing the bulk of Bhutan’s famous red rice from its terraced fields. 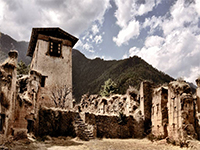 This dzong, with a picturesque village nestling below its ramparts, was built by Shabdrung Ngawang Namgyal in 1646, to commemorate his victory over the Tibetan invaders. Though largely destroyed by fire in 1951, the towering outer walls and central keep remain an imposing sight. On a clear day, there is a splendid view of Mt. Jomolhari from the approach road to Drukgyel Dzong. 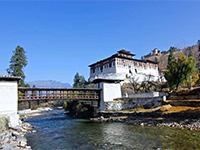 Built in 1646 by Shabdrung Ngawang Namgyal, the “fortress of the heap of jewels” stands on a hill above Paro township. The approach to the Dzong is through a traditional covered bridge (called the Nemi Zam) and then up a paved stone path running alongside the imposing outer walls. The valley’s annual springtime religious festival, the Paro Tsechu, takes place in the courtyard of the dzong and on the dance ground on the hillside above. 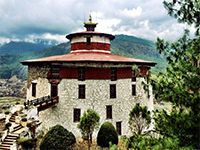 On a ridge immediately above Rinpung Dzong is Ta Dzong, built as a watchtower to protect Rinpung Dzong. (“Ta” means “to see” in Dzongkha, so the watchtower of a dzong is always called a “Ta dzong”). On account of their function, watchtowers are always round in shape. In 1968 Paro’s Ta Dzong was inaugurated as the National Museum, and now holds a fascinating collection of art, relics, religious thangkha paintings, Bhutan’s exquisite postage stamps, coins and handicrafts, together with a small natural history collection. 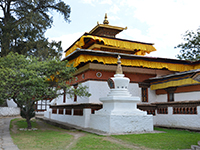 This lhakhang, built in the 7th century, is one of the two oldest and most sacred shrines in Bhutan (the other being Jambey Lhakhang in Bumthang). Kyichu Lhakhang is composed of twin temples. The first temple was built by the Tibetan king, Songtsen Gampo in the 7th century. In 1968, H.M. Ashi Kesang, the Queen Mother of Bhutan, arranged for a second temple to be built alongside the first one, in same style. 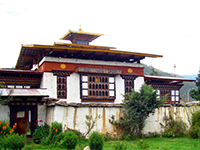 This temple in Paro town was built in 1525 by Ngawang Chhogyel, one of the prince-abbots of Raling in Tibet, and an ancestor of the Shabdrung, Ngawang Namgyal. 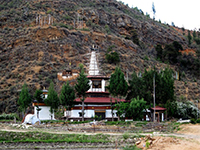 The uniqueness of this temple lies in the fact that it is in the form of a chorten, one of the very few that exists in Bhutan. The lhakhang was built in 1421 by the famous Tibetan lama, Thongten Gyelpo (1385-1465) who was also known as Changzampa or the builder of iron bridges. It is believed that a demoness was terrorizing the Paro valley and the very hill that the temple is built on turned out to be the demoness’s head. So he built a chorten shaped temple over the demoness’s head or the hills to overpower her, as chortens most of the time play the part of a nail that immobilizes a demon. 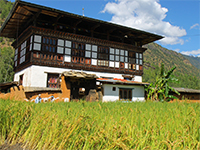 The natural beauty of Paro valley is enhanced by picturesque farmhouses dotted about the fields and on the hillsides. The two to three-storied Bhutanese farmhouses are handsome in appearance, with colorfully decorated outer walls and lintels, and are traditionally built without the use of single nail. All houses follow the same architectural style. A visit to a farmhouse gives an interesting glimpse into the lifestyle of a farming family. 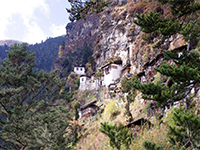 Kila Gompa This is the serene home of Buddhist nuns who have dedicated their lives to spiritual fulfillment. In this gompa, nestled in a craggy patch of rock on the mountainside below Chele-la pass, they spend their days in religious studies, prayer and meditation. Kila Gompa is about an hour’s walk from Chele-la, down a path through pine forest. Bhutan has seven nunneries, of which Kila Gompa and Buchung Karma Nunnery in Punakha are the oldest. It was initially established in the early 9th century by Dupthob Chhoeje Norbu and Dupthob Temba as a meditation site. After being destroyed by fire, the lhakhang was reconstructed by the 25th Je Khenpo, Sherab Gyaltshen. In 1986, Kila Gompa was officially established by the Government as a nunnery. This monastery is historically significant as a sacred meditation site for renowned saints including Dupthob Chilkarwa, of the Drukpa Kagyupa school. 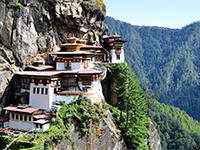 “Tiger’s Nest” monastery, most famous of Bhutan’s monasteries, is spectacularly located on the side of a cliff 900m above the valley floor. It is said that in the 8th century Guru Rinpoche flew on the back of a tigress from eastern Bhutan to this place and meditated in a cave here for 3 months, hence its name, “Tiger’s Nest”. There have been shrines at this sacred place for many centuries. The principal lhakhang of the present monastic complex dates from 1692. The main structure was severely damaged by fire in 1998, but after many years of painstaking restoration work, the complex has now been fully restored to its former glory. Taktsang is a place of pilgrimage which Bhutanese try to visit at least once in a lifetime. An excursion to Taktsang involves a steep climb up through pine forest and takes about five hours round trip. Though the climb up through the pine forest is steep, the journey is most worthwhile on account of the superb views en route and especially from the cafeteria viewpoint itself.