About
What to see
About
(2,670m/8,811ft) The high altitude Haa valley lies south of the Paro valley. The staple crops of this large, fertile valley are wheat, potatoes, barley and millet. Yaks are herded in the upper reaches of the valley, and yak meat from Haa is considered a great delicacy by the townspeople of Thimphu. A day trip to Haa with picnic lunch by the river near new Haa Dzong is very pleasant in the warmer months of the year, when one can drive from Paro to Haa over the Chele-la pass (3,810m/12,573ft). On a clear day there is a superb view of Mts. Jomolhari & Jichu Drake from the pass.
What to see 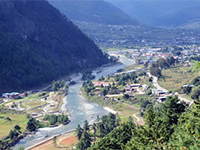 The principal attractions of a visit to Haa are the journey up and over the pass and the picturesque valley itself. Visits can be made to two famous monasteries, Lhakhang Karpo (White Temple) and Lhakhang Nagpo (Black Temple). The central shrine in Lhakhang Nagpo is said to be almost identical to that of the Jowo temple in Lhasa. Legend has it that local deities assisted in the construction of Lhakhang Karpo.