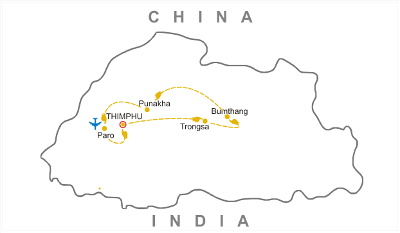 Day 03: Drive from Thimphu to Trongsa

Day 2 will have to fall on a week day as most sites are closed on the weekends. Also note that some sites may be closed during govt. holidays as well.

Day 7 also has a site that is closed on govt. holidays and Sunday. The day must fall on a week day.

Zorig Chusum will be closed on Jan, Feb and Jul due to winter and summer vacations for the students

Your journey begins with the most spectacular mountain flight with views of major Himalayan peaks such as Everest, Kanchenjunga and Makalu, and on the final approach Bhutan’s own snowy peaks, the sacred Jhomolhari, Jichu Drake and Tserimgang. You fly over the southern hills, known as ‘dwars’, or gateways into the Himalayas as they rise from the plains until they meet the great snow-capped peaks that rise up to the sky.

On arrival at Paro airport and after completion of airport formalities, you will be met by your representative (guide). Drive from Paro to Thimphu, the modern capital town of Bhutan and an exciting blend of tradition and modernity.

Rest of the day at leisure or you may want to take a stroll through this lively town.

In the evening, time permitting, visit the impressive Trashicho Dzong/fortress which houses the throne room of the King and various government offices. It is also the summer residence of the Chief Abbot and the central monk body. If your visit falls on a working weekday, arrive in time to watch the hoisting of the National Flag and the March of the Guards.

Thimphu, perhaps the most unusual capital city in the world also serves as the seat of government.

This bustling town is home to Bhutan’s royal family, the civil service, and foreign missions with representation in Bhutan. It is also the headquarters for a number of internationally funded development projects.

* Buddha Dordenma statue sitting on top of a hill overlooking Thimphu. The Statue of Sakyamuni Buddha is one of the tallest in Asia (51.5 m). The site of Buddha Dordenma offers unobstructed views over the capital town.

* The National Memorial Chorten– the building of this landmark was originally envisaged by Bhutan’s third king, His Majesty Jigme Dorji Wangchuck, who had wanted to erect a monument to world peace and prosperity. Completed in 1974 after his untimely death, it is both a memorial to the Late King (“the father of modern Bhutan”), and a monument to peace.

* Folk Heritage and Textile Museums: These museums, both of which opened in 2001, provide fascinating insights into Bhutanese material culture and way of life. Closed on Sat / Sun / Govt. Holidays

* Institute for ZorigChusum: Commonly known as the Painting School, the Institute offers a six-year course on the 13 traditional arts and crafts of Bhutan. On a visit one can see students learning the various skills taught at the school. Closed on Sun / Govt. Holidays / Sat – 10am-12pm

* Handicrafts Emporium: This government-run enterprise displays a wide range of beautifully hand-woven textiles and craft products. It also carries a small collection of books on Bhutan, Buddhism and Himalayan culture.

* National Library, which holds a vast collection of Buddhist texts and manuscripts, some dating back several hundred years, as well as modern academic books mainly on Himalayan culture and religion. Closed on Sat / Sun / Govt. Holidays

In the evening, take a stroll along the town’s main street.

After early breakfast, transfer to Punakha. Drive up to Dochu-la pass (3,088m/10,130ft) and stop here briefly to take in the view and admire the chortens, Mani walls, and prayer flags which decorate the highest point on the road. If skies are clear, the high Himalayan peaks towards the North East will be revealed in all their glory. On a clear day, the following peaks can be seen from this pass (left to right): Masagang (7,158m), Tsendegang (6,960m), Terigang (7,060m), Jejegangphugang (7,158m), Kangphugang (7,170m), Zongaphugang (7,060m) a table mountain that dominates the isolated region of Lunana, and finally, Gangkar Puensum, the highest peak in Bhutan at 7,497m. On the way, visit Semtokha Dzong, built in 1627 and the oldest fortress of the kingdom, which now houses the Institute for Language and Cultural Studies.

We will then continue our trip to Punakha.

Until 1955 Punakha served as the capital of Bhutan and it is still the winter seat of the Je Khenpo (Chief Abbot). Visit the Chimi Lhakhang; the auspicious fertility monastery built in 1499 and a temple dedicated to the “Divine Madman”, an eccentric monk from the 16th century famous for many his many amusing, Rabelaisian folklore stories and drive back to the Hotel.

Following the hike you will drive back up the valley towards Khuruthang passing Punthsho Pelri Palace and several other winter homes of the royal family before reaching the impressive Punakha Dzong, the Dzong built in 1637 by Shabdrung Ngawang Namgyal to serve as the religious and administrative center of the region. Damaged over the centuries by four catastrophic fires and an earthquake, the Dzong has been fully restored in recent years by the present monarch. It is open for visitors during the Punakha festival (early spring) and in the summer months, after the monk body has returned to Thimphu. The Dzong is placed strategically at the junction of the Pho Chu and Mo Chu rivers. This ancient fortress is the winter residence of the monastic order’s head and still serves as the administrative headquarters for the Punakha region.

Balance of the day at leisure.

Today’s journey onward to Jakar (Bumthang) is perhaps long, but certainly memorable with dramatic landscapes of terraced farmland, deep river valleys and precariously perched farmhouses viewed from the only east west highway that has been ingeniously carved out of the mountain faces. Upon reaching Trongsa you may take time to stroll this quaint village and official business permitting, perhaps visit the Trongsa Dzong, ancestral home to Bhutan’s monarch where you will often find novice monks reciting mantras or practicing on sacred horns, flutes or drums. The drive onward to Bumthang takes you over the picturesque Yotong La and down into the Chhume Valley, home of Bhutan’s famous Yatra weaving. Here you will have a chance to browse the traditional textiles and perhaps see the weavers create their intricate handiwork.

Upon Arrival, check in the hotel and rest of the day at leisure.

Bumthang is the general name given to a group of four valleys – Chumey, Choekhor, Tang and Ura, with altitudes varying from 2,600 to 4,000m (8,530-13,125ft). This area is home to many ancient Buddhist temples and monasteries.

Three Temples-Valley Walk: Start at Jambay Lhakhang which was built in the 7th century by the Tibetan king Songtsen Gampo. It is one of 108 monasteries which he built to subdue evil spirits in the Himalayan region. Then continue to Kurjey Lhakhang, heading further into the valley through farmlands for half an hour. Kurjey Lhakhang comprises three temples. The one on the right was built in 1652 against the rock face where Guru Padmasambhava meditated in the 8th century. The middle temple is built on the site of a cave containing a rock with the imprint of the Guru’s body, and is therefore considered to be the most holy. Both Jambay and Kurjey Lhakhang are located on the left banks of Chamkhar Chhu (river). Continue the valley walk from Kurjey Lhakhang across a suspension bridge through small villages and farmlands.

Enjoy a traditional lunch at a farmhouse. You will be served a combination of the local Bumthap cuisine consisting of items made from buck wheat (which is widely grown in this region) and other Bhutanese dishes.

Continue walking towards Tamshing Lhakhang located across the river from Kurjey Lhakhang. This temple was founded in 1501 by Terton Pema Lingpa, a re-incarnation of Guru Padmasambhava. There are very old religious paintings around the inner walls of the temple, which was restored at the end of the 19th century.

End the day with a visit to the Red Panda Beer Brewery and the Cheese Factory (Closed Sun & Govt. Holidays).

Overnight at Hotel in Bumthang

Today’s journey back to Punakha will be a lengthy one, taking lunch en route. Check-in at the hotel on arrival. Rest of the day at leisure

After breakfast, drive back to Paro.

On arriving Paro, visit Ta Dzong, formerly a watchtower and now the National Museum. The museum collection includes ancient Bhutanese art and artifacts, weapons, coins, stamps and a small natural history collection. Then walk down a hillside trail to visit Rinpung Dzong (Paro Dzong) situated at a commanding height overlooking Paro valley. Built by Shabdrung Ngawang Namgyal in 1646, this Dzong now houses Paro’s monk body and the offices of the civil administration and is symbolic as the religious and secular center of all affairs of the valley.

Later you will visit the 7th century Kyichu Lhakhang, one of the 108 temples built in the Himalayas by the Tibetan king, Songtsen Gampo. The building of this temple marks the introduction of Buddhism in Bhutan.

leisure time – have a walk through Small town of Paro.

In the morning, take an excursion to Taktsang Monastery, also known as Tiger’s Nest. It is believed that Guru Rinpoche, founding father of the Bhutanese form of Mahayana Buddhism, arrived here on the back of a tigress and meditated at this monastery. The main structure was severely damaged by fire in 1998, but after many years of painstaking restoration work, the complex has now been fully restored to its former glory.