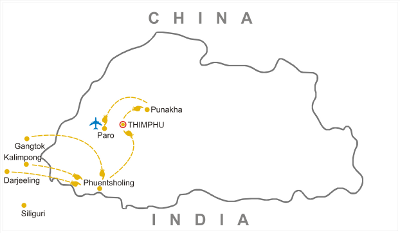 Day 02: Drive from Phuntsholing to Thimphu.

Important remarks: Day 3 will have to fall on a week day as most sites are closed on the weekends. Also note that some sites may be closed during govt. holidays as well.

Zorig Chusum will be closed on Jan, Feb and Jul due to winter and summer vacations for the students

On arrival at Bhutan’s frontier town, Phuentsholing, you will be received by our representative who will help you to go through all the formalities required to enter Bhutan.

The town of Phuentsholing is the gateway for travelers entering Bhutan by road. A thriving commercial centre on the northern edge (West Bengal) of the Indian plains, Phuenthsoling is situated directly at the Himalayan foothills. This town is fascinating mixture of Indian and Bhutanese, a perfect example of mingling of people and their culture.

Check-in at the hotel on arrival.

After finishing all border formalities in Phuentsholing, a scenic drive takes you to the capital, Thimphu. The entire drive is very pleasant with numerous scenic spots en route. Sights on the way include a visit to the Kharbandi Gompa, 4 km ahead of Phuentsholing. This is a beautiful monastery situated in garden of tropical plants and flowers. The monastery contains paintings depicting scenes from the life of Buddha and statues of Shabdrung Ngawang Namgyal and Guru Rimpoche. From the monastery garden there is a splendid view of Phuentsholing and plains of West Bangal and their tea gardens beyond. Lunch would be served en route.

heck-in at the hotel on arrival.

In the evening, take an exploratory walk around Thimphu’s main street, visiting shops and local market.

Thimphu, perhaps the most unusual capital city in the world, is the seat of government. This bustling town is home to Bhutan’s royal family, the civil service, and foreign missions with representation in Bhutan. It is also the headquarters for a number of internationally funded development projects.

Visit National Memorial Chorten– the building of this landmark was originally envisaged by Bhutan’s third king, His Majesty Jigme Dorji Wangchuck, who had wanted to erect a monument to world peace and prosperity. Completed in 1974 after his untimely death, it is both a memorial to the Late King (“the father of modern Bhutan”), and a monument to peace.

* Folk Heritage and Textile Museums: These museums, both of which opened in 2001, provide fascinating insights into Bhutanese material culture and way of life. Closed on Sat / Sun / Govt. Holidays

* Handicrafts Emporium: This government-run enterprise displays a wide range of beautifully hand-woven textiles and craft products. It also carries a small collection of books on Bhutan, Buddhism and Himalayan culture.

* National Library, which holds a vast collection of Buddhist texts and manuscripts, some dating back several hundred years, as well as modern academic books mainly on Himalayan culture and religion. Closed on Sat / Sun / Govt. Holidays

* Institute for ZorigChusum: Commonly known as the Painting School, the Institute offers a six-year course on the 13 traditional arts and crafts of Bhutan. On a visit one can see students learning the various skills taught at the school. Closed on Sun / Govt. Holidays / Sat – 10am-12pm

* TashichhoDzong: The “fortress of the glorious religion” was initially erected in 1641 and rebuilt by King Jigme Dorji Wangchuck in the 1960s. TashichhoDzong houses some ministries, His Majesty’s secretariat, and the central monk body. It is open to visitors during the Thimphu Tsechu (held in autumn) and while the monk body is resident in its winter quarters at Punakha Dzong.

In the evening, take a stroll along the town’s main street.(Overnight at Hotel)

After early breakfast, you either attend the festival or transfer to Punakha. Drive up to Dochu-la pass (3,088m/10,130ft) stopping briefly here to take in the view and admire the chortens, Mani walls, and prayer flags which decorate the highest point on the road. If skies are clear, the high Himalayan peaks towards the northeast will be revealed in all their glory. On a clear day, the following peaks can be seen from this pass (left to right): Masagang (7,158m), Tsendegang (6,960m), Terigang (7,060m), Jejegangphugang (7,158m), Kangphugang (7,170m), Zongaphugang (7,060m) a table mountain that dominates the isolated region of Lunana, and finally, Gangkar Puensum, the highest peak in Bhutan at 7,497m. On the way, visit Semtokha Dzong, built in 1627 and the oldest fortress of the kingdom, which now houses the Institute for Language and Cultural Studies.

Until 1955 Punakha served as the capital of Bhutan and it is still the winter seat of the Je Khenpo (Chief Abbot). Visit the Chimi Lhakhang; the auspicious fertility monastery built in 1499 and a temple dedicated to the “Divine Madman”, an eccentric monk from the 16th century famous for many his many amusing, Rabelaisian folklore stories and drive back to the Hotel.

Following the hike you will drive back up the valley towards Khuruthang passing Punthsho Pelri Palace and several other winter homes of the royal family before reaching the impressive Punakha Dzong, the Dzong built in 1637 by Shabdrung Ngawang Namgyal to serve as the religious and administrative center of the region. Damaged over the centuries by four catastrophic fires and an earthquake, the Dzong has been fully restored in recent years by the present monarch. It is open for visitors during the Punakha festival (early spring) and in the summer months, after the monk body has returned to Thimphu. The Dzong is placed strategically at the junction of the Pho Chu and Mo Chu rivers. This ancient fortress is the winter residence of the monastic order’s head and still serves as the administrative headquarters for the Punakha region.

Balance of the day at leisure. (Overnight at Hotel)

Today, you will begin the day with hike up through fields of rice along the banks of the Mo Chhu to the upper end of the valley to the KhamsumYuelleyNamgyalChorten, a stunning monument recently built by the Queens and consecrated in 1999.

After Lunch we will then proceed to move on to Paro, a historic town with many sacred sites and historical buildings scattered through the area. In addition, the Paro Valley is wide and verdant and is recognized a one of the most beautiful in all Bhutan.

If you wish you may explore the town in the evening.

In the morning, take an excursion to Taktsang Monastery, also known as Tiger’s Nest. It is believed that Guru Rinpoche, founding father of the Bhutanese form of Mahayana Buddhism, arrived here on the back of a tigress and meditated at this monastery. The main structure was severely damaged by fire in 1998, but after many years of painstaking restoration work, the complex has now been fully restored to its former glory.

We have finally reached the end of our journey and we hope that you had a wonderful time in Bhutan, hopefully you have made some memories to take back with you and we hope that we will see you again!