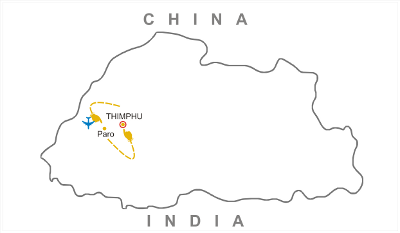 Important remarks: Day 2 will have to fall on a week day as most sites are closed on the weekends. Also note that some sites may be closed during govt. holidays as well.

On a clear day, the flight to Paro is breathtaking, with views of the major Himalayan peaks such as Everest, Kanchenjunga and Makalu and on the final approach Bhutan’s own snowy peaks, the sacred Jhomolhari, Jichu Drake and Tserimgang.

After arriving at Paro airport and on the completion of airport formalities, you will be met by your Etho Metho representative. After the meeting we go on to drive from Paro to Thimphu, the modern capital town of Bhutan which is described as an exciting blend of tradition and modernity.

On arrival we will check in to our hotels.

In the afternoon we will then proceed to visit the National Memorial Chorten – a landmark originally envisaged by Bhutan’s third king, His Majesty Jigme Dorji Wangchuck, who had wanted to erect a monument as a tribute to world peace and prosperity. It was finally completed in 1974 after his untimely death and now it is both a monument towards world peace and also a memorial to the Late King who is beloved as “the father of modern Bhutan”.

Next, we will move on to visit Tashichhodzong: the “fortress of the glorious religion” which was initially erected in 1641 and then rebuilt by King Jigme Dorji Wangchuck in the 1960s. The Dzong houses some ministries, His Majesty’s secretariat, and also the central monk body. It is open to visitors during the Thimphu Tsechu (held in autumn) and while the monk body resides in its winter quarters at Punakha Dzong.

Disclaimer: Depending on the flight timing it may or may not be possible to visit these sites

After breakfast we will move on to site see a bit more of the capital and visit some places that will help us learn a bit about the traditional literature and craftsmanship of Bhutan.

The itinerary for today includes places such as:

The Institute for Zorig Chusum (commonly known as the Painting School) where students undergo a six-year training course in Bhutan’s 13 traditional arts and crafts. Closed on Sun / Govt. Holidays

We will then proceed to Paro where we will have lunch. On arrival, we visit the Ta Dzong, formerly a watchtower and now the National Museum. The museum collection includes ancient Bhutanese art and artifacts, weapons, coins, stamps and a small natural history collection. Then visit Rinpung Dzong (Paro Dzong) situated at a commanding height overlooking Paro valley. Built by ShabdrungNgawangNamgyal in 1646, this Dzong now houses Paro’s monk body and the offices of the civil administration and is symbolic as the religious and secular center of all affairs of the valley. Closed on Govt. Holidays

You will also visit the 7th century KyichuLhakhang, one of the 108 temples built in the Himalayas by the Tibetan king, SongtsenGampo. The building of this temple marks the introduction of Buddhism in Bhutan.

In the morning we gear up for the excursion up to Taktsang Monastery, also known as the Tiger’s Nest. It is believed that Guru Rinpoche, the founding father of the Bhutanese form of Mahayana Buddhism, arrived here on the back of a tigress and meditated at this monastery. The main structure was severely damaged by fire in 1998, but after many years of painstaking restoration work, the complex has now been fully restored to its former glory.

We have finally reached the end of our journey and we hope that you had a wonderful time in Bhutan, hopefully you have made some memories to take back with you and we hope that we will see you again!